When Syracuse University’s campus bee hives were damaged by a car in July 2021, Lisa Olson-Gugerty was amazed by her colleague Meg Lowe’s determination to help move the hives to a secure location, despite the 90-degree heat and an injured wrist.

“(Lowe) made sure everything was running smoothly,” said Olson-Gugerty, an associate teaching professor at SU’s Falk College of Sport and Human Dynamics. “Every step of the way, she has been there in supporting me beyond what anyone would expect a colleague at work to do.”

Lowe will be leaving her role as a sustainability coordinator at SU this Friday, which happens to be Earth Day. She will be joining Montera Health, a health care company, as a graphic designer.

Read the full story on dailyorange.com.

Allocating nearly $327 million to student financial aid, Syracuse University’s 2022-23 budget prioritizes financial assistance for promising students who aspire to be part of the growing Orange community. The figure reflects a nearly 9% increase in student financial aid, and is also supported by the ongoing success of the Forever Orange Campaign, which has broken all previous University records for fundraising to support student access and success.

“This historic investment in financial aid will allow the University to offer a distinctive experience to diverse students from across the socioeconomic spectrum,” says Ryan Williams, vice president for enrollment services. “We are looking forward to welcoming a talented new cohort of students and our returning students when the Fall 2022 semester gets underway. Returning students have persevered despite pandemic-related challenges. This investment in financial aid helps ensure that they earn their degrees in a timely manner.”

As we head toward the end of the semester, I hope everyone can take time to enjoy the start of spring, even as this is one of the busiest times of year. This is also the time that Campus Planning, Design and Construction (CPDC) prepares for its summer work on campus. There are many renovations and major projects planned throughout campus that will enhance the student experience, academic experience and overall enjoyment of our beautiful campus.

It is important to keep our campus community informed regarding our upcoming projects. As we have done in the past, an information session to share our planned utility and site work for the summer is scheduled for today. Everyone from our campus community is invited to attend. The session will take place at 4 p.m. in the K.G. Tan Auditorium in the Daniel and Gayle D’Aniello Building, home of the National Veterans Resource Center.

Read the full update at the Campus Facilities and Administration Services page.

The information session will take place Monday, April 18, at 4 p.m. in the K.G. Tan Auditorium in the Daniel and Gayle D’Aniello Building, home of the National Veterans Resource Center.

All are welcome to join to learn about planned improvements to campus utilities and sites taking place this summer.

The Department of Public Safety (DPS) will conduct a test of the Orange Alert Campus Crisis Alert Notification System on Wednesday, April 20, at 3:40 p.m. ET. It will be a full test of the system which includes notifications sent via email, text message and voice call. The test will also include the Orange Alert outdoor siren system on the University’s North and South campuses. The sirens will be activated for two minutes at 3:40 p.m.

In addition to email, text and voice messages, the Orange Alert test message will also be sent via push notification to the Rave Guardian app, the main Syracuse University and DPS Facebook and Twitter accounts and will display on the University’s homepage and video monitors located in common areas in several buildings around campus.

Syracuse University is seeking student nominations for the Student of Color Advisory Committee, the student group tasked with collaborating closely with the Department of Public Safety (DPS).

This committee, which originated in Fall 2018 with the idea of bringing students, DPS members and other campus community members together to focus on integrating public safety with quality-of-life matters, will provide feedback on safety and DPS intervention, among other topics. Students selected as part of the committee will work with DPS and other staff members to develop solutions to further ensure the well-being of students on and off campus.

The University’s inaugural Community Review Board (CRB) invites students, faculty and staff to its first open forum on Thursday, April 21, from 11 a.m. to 12:30 p.m. in the Melanie Gray Ceremonial Courtroom in Dineen Hall.

After a brief introduction of the CRB’s mission, representatives and progress to date, the open forum will serve as a listening session where members of the campus community can bring forth ideas, opinions, personal experiences and concerns related to the Department of Public Safety (DPS) and policing on campus.

Today is my first official day as a member of the Syracuse University family. I am grateful for the opportunity to be Orange and look forward to getting to know the students, faculty and staff that make up this special community.

Throughout the interview process, it was obvious that Syracuse University would not be like any of the other institutions at which I served. The spirit and energy are palpable. When I walked the Einhorn Family Walk during my last visit, not only did I encounter so many wonderful people, I also had my first interaction with Otto. Like all of you at that time, masks were still covering our faces, even Otto, but the welcoming feeling and sense of community were vibrant and visible.

Read the full message at dps.syr.edu. 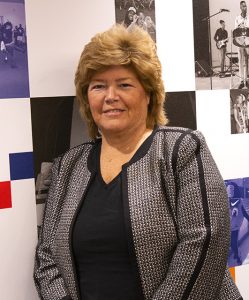 In many ways, Sue Bracy’s career growth at Syracuse University Food Services parallels the growth of the department. When she began her career at Syracuse University in August 1987, the department’s retail footprint was miniscule: only three cafes. She was hired to supervise the three cafes, never envisioning how large the department would grow. Over the next three decades, her career would take her from those cafes, to vending, then to Kimmel Food Court, the Goldstein Alumni and Faculty Center Restaurant, Catering Services, Goldstein Student Center, and finally, to leading the opening of the sparkling new food court at the renovated Schine Student Center.

“You can’t spell Syracuse without S-U-E,” said Jon Webster, executive director of hospitality. “Her fingerprints are all over our department and the University in an extremely positive, selfless way.”

Sue’s Syracuse University roots run deep. Her mom worked at the Carrier Dome for 25 years as the administrative assistant for then-director Pat Campbell. Her sister worked at Hendrick’s Chapel. Her family has had season tickets for over 35 years and she’s a proud alumna herself. Sue graduated from the University in May 1986 with a major in child development and a minor in psychology. While she acknowledges that a degree in child development doesn’t typically lead to a career in food service, Sue had worked at McDonald’s throughout her time in college and had actually earned 12 college credits through Hamburger University, the company’s Chicago-based training program.

Once she started her career at Syracuse, her hard work and obvious leadership skills meant that she steadily gained more responsibility. Sue was promoted several times, and eventually took on the role of co-director of Food Services in 2016.

“I’m often awestruck as to how Sue managed balancing a genuine concern for employees while maintaining the many policies and guidelines of the University and adhering to the rules of our union contract,” said Michelle Schieder, the campus’s SEIU co-chief steward of the food service division, who worked alongside Sue for most of her career. “She wore many hats and wore them well. She managed a piece in catering, the Dome, retail sales, dining centers, and negotiations.”

There were ups and downs over her 35 years. The fun came in catering special events and designing themed events and special parties for alumni. Stress was there too, especially managing the Food Services department through a global pandemic. She and her team worked nearly non-stop when Schine Dining reopened in spring 2021, in the middle of the COVID-19 pandemic.

Her co-director at the time, Mark Tewksbury, will always remember the care she showed for Food Services staff members at the uncertain outset of the pandemic. Her employees were all designated essential workers who needed to be on campus every day.

“I’ll never forget the long hours as we navigated the start of the pandemic,” Tewksbury said. “Sue’s concern for the safety of our team while maintaining service to students who remained on campus was immeasurable.”

“We had no written procedures for how to do that,” Bracy said. “It was just a lot of creative maneuvering. COVID was a constant learning experience, one where people stepped way out of their job descriptions just to get the job done.”

It is those memories that will stay with her, she says. How hard the members of the Food Services department work. How much they care about the University and the people here.

“There are some long-time employees here that are just great,” she said. “These are the people who are the backbone of Food Services.”

Among her employees, Sue’s guidance and her willingness to lead are what they will treasure about her time at Syracuse.

“Under Sue’s direction, I was able to maximize my skills, because she constantly encouraged me to try new things,” said Keone Weigl, Food Services’ marketing manager. “Her management style gave me the confidence to become the best version of myself and a better employee for Syracuse University. I feel extremely fortunate to have had the chance to work with Sue.”

“Sue has always been tireless in her pursuit of making everyone around her know that she is in it right along with us,” said Catherine Brozaitis, Supervisor of Schine Dining. “Sue has been such a strong and positive influence on so many, and most consider her their mentor. Sue has garnered respect by the example she has set for all of us.”

Though her official last day at the University was at the end of February, she hasn’t left campus forever: she’s agreed to stay on as a temp to help the under-staffed department recruit, hire, and train new employees.

Stepping away from the hectic day-to-day operations of the department has meant that she’s able to spend more time with her family, especially her elderly father. Her influence will live on in the Food Services department, including with its new leader, Webster.

“I wanted to be a part of charting the future course of Syracuse University Food Services with her,” said Webster. “I cannot imagine being successful in this position without her guidance and counsel, and I wish her well as she moves to the next chapter of her life.”

The Housing, Meal Plan, and I.D. Card Services Office will move from 206 Steele Hall to 111 Waverly Avenue, Suite 111. The office, which attracts thousands of walk-in visitors annually, will print and distribute I.D. cards from 206 Steele through Thursday, March 17, before operations begin at its new location on Monday, March 21 at 8:30 a.m.

Signage will be in place at Steele Hall to direct campus community members to the new location. Auxiliary Services joins New Student and Family Programs in the recently renovated first floor of 111 Waverly, with other University offices set to follow throughout the spring and summer.